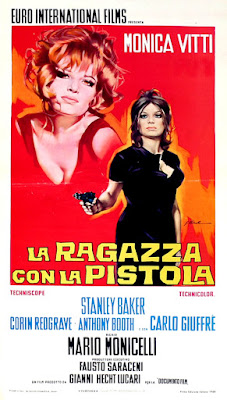 The amazing variety and quantity of good to great films produced by the Italian film industry from, say, 1955 to '75 never ceases to amaze me; what's even more startling is how many of these films are barely known or even forgotten. The big name directors like Fellini, Bertolucci, and Antonioni still get their justly deserved due, but filmmakers such as Elio Petri, Mario Monicelli, and Antonio Pietrangeli, like the other three, should be in the pantheon of directors famous enough to be known by their last names only.

Monicelli,  the director of The Girl with a Pistol, was, and is, famous for Big Deal on Madonna Street (1958), but his greatest film, The Organizer (1963), a beautifully-crafted and entertaining story about a labour revolt in 19th-century Turin, never turns up on listicles of all-time great films. Girl is a picaresque comedy that's good, but not great, and features some of the best qualities of Italian cinema from that period. And, of course, it's almost forgotten.

Assunta, played by Monica Vitti, is a young Sicilian woman who is accidentally abducted by her sister's suitor, Vincenzo. According to Sicilian custom, a woman taken like this must marry her kidnapper to avoid the shame of being a "dishonoured" woman. Assunta is happy to have been taken, but Vincenzo is alarmed by her sexual enthusiasm, which he feels make her a "shameless" woman. He abandons her and flees to England. Sicilian tradition dictates that Vincenzo should be killed by a male member of Assunta's family to restore Assunta's honour, but there are no men in Assunta's family. Assunta decides to follow Vincenzo to England and kill him herself.

What follows is a road movie as Assunta bounces around England searching for Vincenzo and experiences multiple culture shocks as she encounters a vastly more liberal society. After a variety of comic adventures she becomes romantically involved (sort of) with an English doctor (played by Stanley Baker) begins working as a model, becomes liberated, and finally gets a measure of revenge against Vincenzo.

The humour in Girl is often on the broad and silly side, but Vitti's skillful, charming performance makes most of it palatable. Although the film gets some comic mileage out of poking fun at Brits (OMG men in kilts! Gay aristos!), the sharpest comic barbs are aimed at Sicily's codes of honour, modesty, and machismo that trap women and men in ridiculous and dangerous relationships. This is driven home in the film's first scene in which a rooftop full of single men dance the twist with each other while looking longingly at a shuttered window across the street behind which single women dance together to the same music. In this regard Girl is very on point for Italian cinema in its charting of the massive fault lines in Italian society. The other hallmark of the best Italian directors is their strong visual sense, and that's very much on show here. The scenes in Assunta's village are strikingly composed and include several brief fantasy sequences that are of a Fellini standard. But the English scenes! Sometimes it takes a stranger to see a country as it really is, and Monicelli shows us images of the country that UK directors of the time probably avoided. Part of the story takes place in Sheffield, and Monicelli delights in showing its blackened buildings and smoky atmosphere. And his London isn't swinging, it's dirty and filled with poky little restaurants and cafes. The film, despite being a big hit in Italy, was never released in the UK, and one wonders if it was because of how it depicted Britain and the British.

This film exists--barely, it seems--on DVD, but I saw it on YouTube, and that print has pretty minimal subtitles. Despite that drawback, it's still very entertaining and a reminder that for twenty years the Italians ruled cinema.