Book Review: The Career of Nicodemus Dyzma (1932) by Tadeusz Dolega-Mostowicz 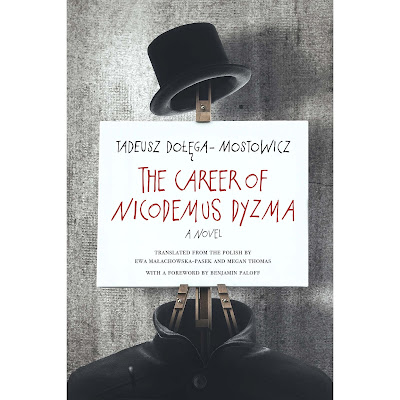 This Polish satirical novel first gained fame when it became known that Polish-American novelist Jerzy Kosinski had plagiarized it for his novel Being There (1970), which later became a critically-acclaimed film starring Peter Sellers. It's only recently been translated, and it's easy to see what made it a tempting target for Kosinki: the story is wrapped up in details of Polish political and cultural life from the 1930s, but the basic concept of a ne'er-do-well making a meteoric rise from the gutter to the top thanks to a chance remark is clearly and easily transferable to other countries and times.

We meet Nicodemus, the titular rascal, just as he fails an audition to be a "taxi dancer," a job that entails being paid to dance with any and all partners at a low-rent dance hall. This is the latest in a lifetime of setbacks for Nicodemus, who's approaching forty and lives in the corner of a grotty Warsaw apartment with a prostitute and an unsympathetic landlady. Nicodemus is wandering the city when he comes into possession of an invitation for a banquet at one of Warsaw's top hotels. Since his worldly wealth consists of the evening suit which he'd hoped to use to get a dancing job, Nicodemus decides to don this disguise and go to the banquet in the hope of scarfing as much food as possible before he's thrown out. The banquet is attended by the country's political elite, and Nicodemus is just about to start gobbling some food when a man bumps into him and sends his food to the floor. In his rage at losing some nice grub, Nicodemus loudly curses the man out. The man is Terkowski, a minister in the government, who, it turns out, has many enemies and rivals, all of whom are delighted that he's been cut down a notch in public. Nicodemus harsh words are mangled and revised in the retelling, and within the space of an hour he's a hero.

From there, Nicodemus rides a rising tide of rumor, dumb luck, and baseless supposition that casts him in the role of a financial savant who can solve Poland's economic woes. Nicodemus is avaricious enough to seize this opportunity, and cunning and ruthless enough to rise still further. The only person who sees through him immediately is an aristocratic madman, the brother of a wealthy heiress Nicodemus eventually marries. As the novel ends, Nicodemus is contemplating an offer to form Poland's next government.

The novel's satire is broad and savage, and Nicodemus's rise to the top is cleverly plotted. The author is particularly good at showing how the elites Nicodemus moves among are eager and willing to interpret his ignorant and clueless statements as pearls of wisdom, and a lot of the humour arises from this dichotomy. Any comparisons to Donald Trump are entirely appropriate. A sub-plot about a cult of devil-worshipping women who appoint Nicodemus as their leader feels out of place, but I'll assume it would have had some meaning for the novel's original audience. It's clear Kosinski stole this novel's plot, but I'd guess Dolega-Mostowicz was inspired by the story of Wilhelm Voigt. In 1906 Voigt disguised himself as a German Army captain, commandeered a group of soldiers in the small town of Kopenick, marched to the town hall and had the town's mayor arrested on fraud charges. He then took 4,000 marks from the town coffers as "evidence" and promptly disappeared. Voigt was a career petty criminal, and the success of his scam relied on the automatic and unthinking respect Germans gave to army officers. Voigt and his ruse became famous (he made a personal appearance tour!), and his story was told in films and a play called The Captain of Kopenick. The Big Lie, it seems, works equally well in fiction and real life.