Book Review: Utterly Dark and the Face of the Deep (2021) by Philip Reeve 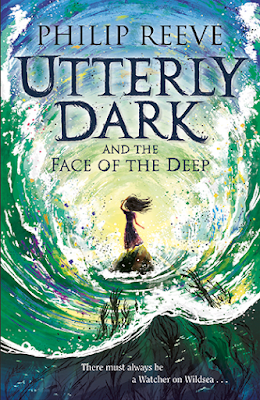 Let's talk about world-building. It's the keystone of sci-fi and fantasy novels, but in my reading experience it's the rare author in those fields who can do it well. Some writers over egg their pudding by cramming details about customs, languages, laws, and zoology into their writing until their "world" begins to feel like a fussy, claustrophobia-inducing, overfurnished apartment filled with things and people who apparently got their names as the result of a tragic draw of tiles from a Scrabble bag. These are the writers who probably spend their spare time building extravagant model train layouts. Frank Herbert and Iain Banks must have been enthusiastic hobbyists. On the other hand, there are authors who pay as little attention to world-building as I do to maintaining my lawn. I can recall an SF novel set on a planet that was one big ocean and yet contained only one described type of fish. One! N.K. Jemisin's The Fifth Season is very well-written but I couldn't finish it because the world-building was so threadbare. And that's the unique thing about world-building; otherwise good writers can be duds at that particular craft.

The kings and queens of world-building would be Tolkien, Mervyn Peake, Ursula K. Le Guin, and Diane Wynne Jones. So where does that leave Philip Reeve, author of the Mortal Engines Quartet and a wide variety of other SF/F novels for the YA and JF crowd? I'd rank him as a princeling or dauphin, able to shape and populate living, breathing new worlds that fire the imagination without resorting to boxcar-sized info dumps. In Utterly Dark, the setting is an alternate reality Britain in the early Victorian period(?). Utterly Dark is also the name of a girl, a foundling who washed up on a beach in a basket on the island of Wildsea off the coast of England. She was adopted and raised by Andrewe Dark, who has the ancestral, but boring, task of watching the western seas from a tower at sundown every night. He's on the lookout for a legendary sea monster called the Gorm, who, so far, has never shown up. Andrewe drowns and Utterly takes over his job, at least until Will, Andrewe's brother, arrives from England. Soon enough, the Gorm goes from legend to kraken-ish reality, a cohort of Seaweed Men appear, as well as a sunken city and an irate Queen of the Deeps.

Reeve's is on top of his world-building game here. Wildsea is a recognizably English world, but one seasoned with enough subtle differences to make it pleasingly new and intriguing. When the action moves on and under the ocean, things kick up a notch. The highlight is the sight of the phosphorescent souls/spirits of drowned men and women bobbing below the surface of the water like so many ethereal jellyfish. It's a brilliantly haunting image. Utterly Dark delivers in terms of imagination and adventure, but if there's problem with the novel is that it feels like an amuse bouche setting up the planned sequel(s). The undersea section is the most compelling part of the story, but, unfortunately, it doesn't take up enough of the plot. Here's hoping for an entirely sub-aqueous sequel.