Book Review: The Fourth of June (1962) by David Benedictus 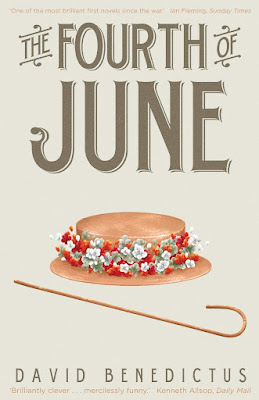 Before the libidinous suet pudding and Eton graduate known as Boris Johnson came along, Eton College was famous as an artisanal workshop crafting young white boys into assorted British PMs, cabinet ministers, as well as sundry leaders of UK culture and industry (look for the maker's mark on their bottoms). It was justifiably regarded as a bad thing that one academic institution, famed for its wealth and snobbery, should have an outsize influence on British society and culture. Cue the political arrival of Johnson, a man who read Animal Farm as a how-to guide for upper management, and Jacob Rees-Mogg, better known as the posh, but dim, ghost from that set-in-England episode of Scooby Doo, and the dialogue swerved from how anachronistic and elitist Eton was, to how toxic and omni-incompetent its graduates are.

It turns out that a novel written sixty years ago had already hit the fire alarm on Eton. David Benedictus, an Eton graduate, wrote this incendiary portrait of life at the college less than six years after graduating. I know nothing about British libel law, but I'm shocked, given the time period, he wasn't sued into oblivion. The student body he describes is stuffed with viciously snobbish mediocrities with an appetite for sadism, psychological torture, the sexual coercion and harassment of younger boys, plus a side order of servility in the face of tradition. And the teachers aren't any better. It's as unflattering a picture as you could want in 1962 or 2022.

The main student character is Phillips, a boy with literary leanings who finds himself witness to a formal, sanctioned beating (Eton students could and did discipline each other) that puts a student in hospital for the trivial crime of being out of his room after hours. Initially, the severity of this incident threatens to lead to the expulsion of Phillips and three of his peers. Eton, however, hasn't lasted hundreds of years by not knowing how to sweep a scandal under the Aubusson. Strings are pulled, important voices raised, and, in one case, sexual favours are provided to a housemaster. The result is that the guilty go unpunished, and the culture of cruelty and moral cowardice that put a boy in hospital is allowed to continue.

The Fourth of June doesn't rely on sensationalism to hold the reader's attention. Benedictus writes with wit and precision, showing how the weaknesses and vices of students and teachers are allowed to flourish in the hothouse atmosphere of Eton. Phillips is essentially a bright, average youth, but Eton's cult-like obsession with form, duty and tradition breaks down his moral barriers and makes him actually enjoy watching a fellow student savagely beaten, even as part of him recoils from it. The beaten boy, Scarfe, a junior God-botherer and most definitely not one of us, is the only who leaves the school, gently pushed out with the excuse that his delicate constitution isn't suitable for the rigors of Eton. He is, of course, psychologically damaged beyond repair by the time he leaves the college. And forty years later the same damage, and worse, is being inflicted upon Britain by another cohort of Etonians.