Book Review: The Zebra-Striped Hearse (1962) and The Far Side of the Dollar (1964) by Ross MacDonald 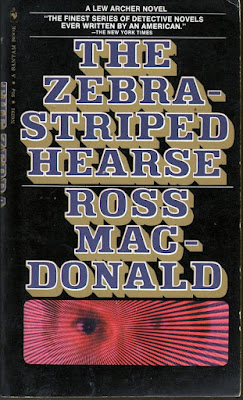 Sometime during my mid-teens in the early 1970s, Ross MacDonald became my favorite writer. I'd had limited experience with "adult" literature, so I was bowled over by his convoluted tales of murder and sleuthing set in California, that impossibly glamorous and faraway land, especially when seen from a Canadian perspective. His stories seemed immeasurably more real and gripping than the cream tea world of Agatha Christie, who was the only other crime writer I was familiar with. I wasn't MacDonald's only fan. In the '60s he began to attract widespread critical acclaim and regular appearances on best-seller lists. He was even dubbed a great novelist, let alone a top crime writer. I'm here to report that we didn't know what we were talking about back then. I've reread a lot of writers I enjoyed when I was young and found them lacking in one regard or another, but I've rarely come across one who has so comprehensively failed the test of time.

Lew Archer is MacDonald's detective, and the stories are told from his perspective. Stylistically he follows in the footsteps of Raymond Chandler's Philip Marlowe. The main, and devastating, difference between the two is that Archer is both dull and annoying. He's less a character than a private detective bot that trundles around California asking suspects questions with the tirelessness and borderline rudeness of a customs inspector who's been called in to cover someone else's shift. Where Marlowe dropped ironic, flippant, and caustic remarks as a reaction to the nastiness and weirdness California threw at him, and did so with humor, Archer comes across as petty and nagging, a sort of gumshoe Karen. And his observations about life and the people he encounters are shallow, unimaginative, and seasoned with tidbits of pop psychology that feel like they were gleaned from Reader's Digest articles. MacDonald was, and is, strongly identified with California but his descriptions of the land and architecture are sparse and boilerplate. 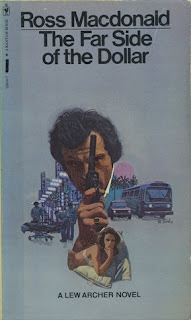 Like all of MacDonald's work, these two novels feature murders caused by ruined or poisonous family relationships that have their roots in the past, usually with a psychological motive. People don't often murder for money in Archer's world. In Zebra, a young woman kills because she's jealous of her father's affection for a girl he regards as a surrogate daughter. In Dollar, jealousy rooted in parentage becomes the reason for murder. MacDonald is certainly skillful at constructing mystery plots that move quickly and hang together logically. Where he runs into trouble is in showing how Archer deconstructs the puzzles he's faced with. The plots are absurdly dependent on Archer sub-contracting his investigations to contacts he has in law enforcement all over California. He picks up a phone and asks a detective to check out this or that, et voila, a few pages later he gets a gift-wrapped piece of crucial information. In a similar vein, when  Archer questions someone they frequently spill their guts to him faster than you can say "I don't think so." This makes the novels brutally efficient examples of storytelling, and yet lazy at the same time.

MacDonald's writing has aged poorly in the usual ways: teenagers and young adults are faintly ridiculous creatures with their interest in music and surfing and not wearing fedoras; modern art (modern anything, really) is weird and pretentious; and the defining characteristic of women is how attractive or unattractive they are, with a special emphasis on the size, shape and movement of their breasts. Not surprising stuff for the era, but coupled with his other deficiencies it makes MacDonald a tough author to look back on with fondness. So what can I say? We had lousy taste in detective fiction back then. Sorry. 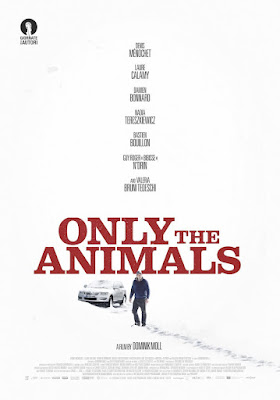 Quick, think of a film with the most devious and startling plot twists you've ever seen...Got it? Whatever you chose, it's not a patch on this one. Compared to this film, The Usual Suspects is an episode of Murder, She Wrote. This fiendishly-plotted French mystery-thriller came out in France two years ago, but has just been released this year (subtitled) on streaming services. Why did they make us wait? French filmmakers and writers have a definite affinity for twisted storytelling that confounds the viewer/reader, going back to Henri-Georges Clouzot's Les Diaboliques (1955). Sebastian Japrisot ranks as the grandmaster in this field having created classics of deception and intrigue on screen and in print, as have the novelists Frederic Dard and Boileau-Narcejac. Dominik Moll, the director of Only the Animals, has form in this Gallic genre, having directed the scary/nasty With a Friend Like Harry in 2000. He's created a classic this time out.

Now here's the hard part: doing a synopsis without spoilers. The plot is so finely crafted, so filled with small but crucial elements, that saying anything about it beyond generalities risks ruining it. The first scene takes place in the Cote d'Ivoire and follows a young man delivering a goat to an apartment building. The next scene is set on a snowy plateau in rural France where an abandoned car is found. And that's all that's safe to say. The story follows a handful of characters whose seemingly separate lives are invisibly linked in ways that will result in a murder. The delicate architecture of the plot and the economy with which it's told are breathtaking. But this film doesn't succeed just because of its engineering; it's not simply a technical exercise in misdirection and clue-finding like an Agatha Christie story in which the characters are merely pieces on a chessboard. These people are linked, and in some cases doomed, by their extreme need for different kinds of love, and the film, using only a few deft, narrative strokes, sketches in the causes of their heartache.

Several reviews I've read have comparted its plot structure to Rashomon, which is somewhat misleading. Kurosawa's film looked at one event from the perspective of various characters, each of whom saw it differently as filtered through their memory and moral point of view. This film shows a series of events as seen by different characters. They all see exactly the same things, but they don't fully realize what they're looking at. Is the story farfetched? Yes, definitely. But that's what's required in a film of this type, it's what makes them so audaciously entertaining. And, like the best mystery films, Only the Animals saves one of it's most stunning reveals for the very last scene. 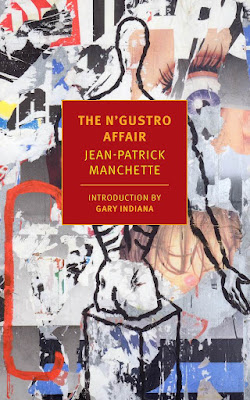 Jean-Patrick Manchette is one of several French crime writers (Dominique Manotti, Didier Daeninckx, Pascal Garnier) who combine hard-boiled prose and characters with equally savage political and social commentary from a left-wing perspective. It's not a combination often found in Anglo-American crime writing. Julian Rathbone and early Eric Ambler come to mind, but neither were as cold-blooded and forceful as their French brethren. And in the U.S.? I can't think of any authors who fit that mold, with the possible exception of Ross Thomas.

The N'Gustro Affair is a fictionalized account of a political kidnapping and assassination that took place in France in 1965 and involved the Moroccan security services, crooked French cops, and a petty criminal. Manchette makes Henri Butron, a career thug and sociopath, the centre of his novel, which unfolds in two interlocking narratives, one told by Butron through a tape recording he makes before his (unexpected) death, the other observing two African politicians as they listen to Butron's tape. Butron tells his entire life story as one long boast about his scheming, nihilism, and cruelty. There was never a time when he was anything other than a petty monster. From a youth spent in brawls against parties of the left and right, he moves on to porn films and gun running, and finally becomes an unwitting and expendable pawn in an assassination plot.

Butron is a truly appalling character: boastful, racist, misogynist, sadistic; I could go on and on, but suffice to say no tears are shed when he dies. Manchette has no sympathy for Butron, and doesn't try to explain his maliciousness through psychology. As in his later novels (The Prone Gunman, Fatale), Manchette sees his sociopathic central characters as natural by-products of their toxic political and cultural environment. Butron is the effluvia of a France poisoned by colonial wars and a reactionary petit bourgeois mentality. This also makes him a useful idiot/tool for bigger, more predatory fish.

Manchette is an uncompromising chronicler of how brutal humanity can be, so much so, in fact, that at points it becomes difficult to stay with the novel. His prose, however, is always sharp and clever, and he never, ever glamorizes or humanizes his heinous characters. What mars this novel is his presentation of the African ringleaders of the conspiracy, which is filled with racist imagery. This can be partly explained by Manchette trying to portray them in as bad a light as Butron, but he does this with, at times, excessive zeal. This isn't Manchette's best novel (that would be Fatale), but it's a good introduction to a French sub-genre of crime fiction that deserves more attention.