Book Review: Child of All Nations (1938) by Irmgard Keun 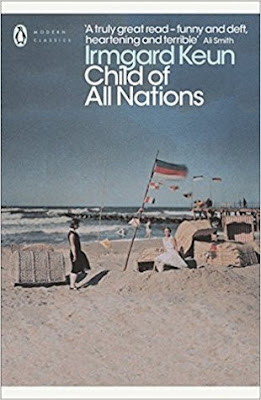 Remember the Eloise books by Kay Thompson about a precocious ten-year-old who lives in New York's swanky Plaza Hotel with her nanny and pet pug and turtle? Now imagine Eloise plunked down with her parents in pre-war Europe and on the run from fascism, and you'll have a rough idea of what Child of All Nations delivers. Like The Passenger, which I reviewed previously on this blog, this novel is about Germans fleeing their country, one step ahead of the Gestapo.

In The Passenger, the title character never manages to leave Germany, while in this novel, Kully (the child of the title) and her parents have already left Germany and are hopscotching around Europe desperately trying to beg, borrow and steal enough money in order to pay for train fares, hotels, and boat passage to America. Told from Kully's point-of-view, Child of All Nations strives to capture the mood of Europe as it becomes awash with rumors and fears of war, and fills with political refugees desperately searching for a bolt hole, or at least a visa to a friendly country.

Kully's father is a writer, spendthrift, and bon vivant who is ill-suited to life on the run. He drops his wife and child off in a series of hotels and rooms, some comfortable, others sketchy, while he hares around non-fascist Europe trying to get writing gigs, borrow from easy touches, and collect on monies owed to him. His wife is long suffering and frequently paralyzed with embarrassment when she's forced to lie or plead with hotel managers who want bills paid, now! Kully takes all the travel and hand-to-mouth living in stride, as children usually do, and finds amusement and wonder in the cavalcade of people she encounters as she crosses Europe, and then finally ends up in the U.S. The world she sees around her is often sad and desperate, and she has the intelligence to recognize this, but her innocence and childish joie de vivre keeps her mostly happy. It's Kully's sunniness and curiosity that throws the agonies of pre-war Europe into stark relief.

Irmgard Keun lived this story as an adult, fleeing Germany in the late '30s with her partner, Joseph Roth, a Jewish German journalist and author. Both were banned authors in Germany. Roth died in Paris in 1939 from acute alcoholism, while Keun hid out in Belgium, changed her name and then spent the rest of the war in Germany. Her novel The Artificial Silk Girl  (1931) is set in the last days of Weimar Germany, and in Ferdinand, the Man with a Kind Heart (1950) she paints a gently comic picture of Germany in the immediate aftermath of the war. Both are excellent and, fortunately, still in print.