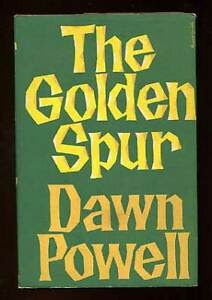 There's a small army of writers who are famous for not being famous, or at least not famous enough. Some of the famously not known include Barbara Pym, Olivia Manning, Charles Portis, James Salter, and Thomas Berger. Dawn Powell, who wrote novels about New York City's cultural movers and shakers and spear carriers from the 1930's to '60s, is in the vanguard of this group. Gore Vidal championed her in in the late '80s, and from then on her rise to being a celebrated un-famous author was certain. Yes, she truly does deserve to a greater degree of fame.

Powell wrote novels set in the Midwest, where she was born and raised in Dickensian poverty, and New York City, where she lived from the early '20s until her death in 1965. The Golden Spur is a N.Y.C. novel. The main character is Jonathan Jaimison, a Candide-like young man who moves to New York to find his father. He was born illegitimate in Ohio, the son of a woman who lived and worked briefly in New York as a typist in 1928. Based on a few clues provided by his aunt, Jonathan thinks his father might be one of three men she came in contact with: a famous painter, a great writer, and a successful lawyer.

Jaimison's search for his father is the loose framework Powell uses to give us a comic tour of New York's cultural population, from major artists down to the wannabes and the hangers-on. Greenwich Village is the centre of most of the action, which is where Jaimison first lands in NY and begins his quest to determine his parentage. Powell has great fun describing the tired boarding hotels, decrepit artists' studios, and speakeasy-ish bars that the characters move between; they form a kind of coral reef which sustains the city's floating population of mostly penniless artists and writers. The novel's title is that of a Village bar in which Jaimison is properly introduced to the city, and it can also be read as a poetic description of the ambition that drives many of the characters to seek fame and fortune.

Powell's comic tone is pitched just this side of savage. She skillfully dissects the pretensions and foibles of the great and the small, but her obvious affection for her characters and their desperate, sometimes hopeless, chase for success and respect stops her from skewering them too badly. Oddly, she seems to have more sympathy for her male characters, viewing their infidelities and selfishness as part and parcel of the artistic temperament. The women, especially a pair of groupies (before that word was known), often seem ditzy or predatory, or both. Jaimison is the Midwestern naif we follow through the big, bad world of Manhattan, and he's successful as the reader's proxy, but the best character is probably Earl Turner, a middle-aged writer who once had a great future but now begs and cadges his way through life while reflecting bitterly on what might have been.

The end of the novel is kind to almost all of the characters, especially Earl, and Powell leaves us with the idea that what she, and her characters, find most fascinating and enthralling about the cultural whirlwind of New York is its constant change and the struggle to be a part of it.