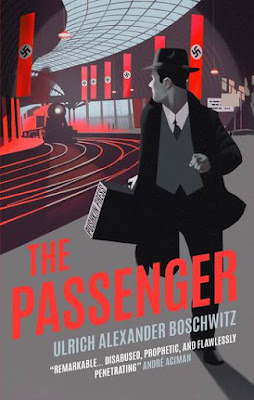 I've read a handful and a half of German novels written between the world wars and they're always a startling glimpse into a society that's increasingly like our own: cynical, feral, vindictive, petty, angry, and more and more in thrall to fascism. Authors such as Hans Fallada, Erich Kastner, and Irmgard Keun charted the decline and fall of the German people from the Weimar Republic to the rubble of Berlin in novels that were unsparing in their examination of the sicknesses that gripped the German psyche.

Ulrich Alexander Boshwitz's The Passenger can be added to the list. What makes it special is that it's written by a Jew who experienced the early horrors of Nazism before fleeing the country in 1935. The other authors I mentioned were "Aryan," as the Nazis would have called them, and, as such, weren't exposed to the full panoply of crimes and brutalities the Nazis were capable of. Boshwitz is superb at showing the gross indignities and the matter-of-fact insults Jews were subjected to, as well as the more lethal activities of the Nazis.

The story, which takes place over a week, is set during Kristallnacht in November, 1938, when the Nazis organized the destruction and looting of Jewish homes and businesses. Otto Silbermann, a middle-aged Jewish businessman, is trying to settle his business affairs prior to fleeing Germany with his wife, who is Aryan. Their son is in Paris trying to secure them entry permits. Silbermann is at home trying to sell his apartment building to a man named Findler, another Aryan, who is beating down the price to a ridiculous level since he knows Silbermann must flee, when there's a pounding at the door. It's the SA, the paramilitary wing of the Nazi Party, and Silbermann runs out of the back of the apartment while the SA beat up Findler.

Silbermann now goes on the run, desperately trying to get his hands on some money, find a route out of Germany, and avoid being noticed. He criss-crosses Germany by rail, tracking down his Aryan business partner who, of course, takes the opportunity to cheat him, as well as following up rumors of secret border crossing routes. As the days and nights of flight take their toll on Silbermann, he becomes more and more exhausted, and, eventually, unhinged. Finally, when his bankroll is stolen while on a train, he completely loses his grip on reality and goes to a police station and demands an investigation. A Jew asking for justice in Germany is clearly insane, and the police inspector he deals with has him sent to an asylum where the novel closes with the inmates screaming in unison, "Jews out!"

Fun stuff. One of the smartest elements of the novel is that Boschwitz uses Silbermann's flight to allow him to meet a score of different characters on trains, and in hotels, bars, and restaurants. This plot device allows him to show us the range and nature of German fascism and anti-Semitism. Silbermann's journey brings him into contact with true believers in Nazism who are anti-Semitic to their core, opportunists who mouth Nazi and racist slogans as a tool to plunder Jewish property, others who parrot the party line without really having thought out what it all means, and a few, including the police inspector, who try, within limits, to help Silbermann. Not all Germans were equal in their enthusiasm for Hitler.

Silbermann's tortured progress around Germany is paralleled by his existential crisis. He's described as "looking" Aryan, which is something he both takes comfort in and resents. He's been a loyal German, fought in WW I, but now he realizes, more acutely than ever, that he's always been an outsider. At the end, what tips him over the edge is his inner conflict over expecting justice and respect as a "good" German and his refusal to deny his Jewishness. The two are not compatible.

The closest comparison for this novel is Hans Fallada's Alone in Berlin, written just after the end of the war. It's also structured like a thriller, and features a large cast of characters, almost all of whom are Aryan and are portrayed in an even less sympathetic light than Boschwitz does with his. Both writers are keen observers of how Nazism gave license to the weak, avaricious, and sadistic to indulge in their darkest fantasies. Boschwitz died in 1942 when the British troopship he was travelling on was torpedoed. He was in the process of revising this novel, and it's possible to see why: two short sections of the novel feel tonally wrong and interrupt the flow of the story, and the ending seems dashed-off rather than conclusive. These are, fortunately, only minor problems in a minor masterpiece.