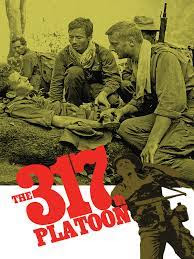 Ever hear of Pierre Schoendoerrffer? Me neither. He was a French war correspondent and photographer who was present at the battle of Dien Bien Phu and spent four months in a Viet Minh POW camp. As the writer and director, he put all his experience of the war in French Indochina into The 317th Platoon, which, it turns out, is one of the very best war movies I've ever seen. I'd never heard of it, and I thought I was familiar with all of the classic war films. Presumably the fact that it's French and deals with a forgotten conflict has kept it in the shadows of film history.

Like so many other war films it deals with a platoon struggling to survive against poor odds. This platoon is made up of ethnic Khmer and is led by four French officers. They are in retreat following the French defeat at Dien Bien Phu and have to travel through a hundred miles of jungle to reach safety. So far, so unexceptional. It sometimes seems more than half of all war films are about platoons battling adversity. The difference here is the almost total absence of sentimentality and the rigorous realism. When men die there is no weeping or reminiscing, just an order for a grave to be dug. The film also avoids big action set pieces. When there is shooting, it's usually seen taking place at a great distance, or the enemy is barely glimpsed, which is how most infantry battles are fought. The intimate shootouts in films like Saving Private Ryan are the exception, not the rule, in modern war. Half the platoon's battle is with exhaustion and the jungle.

The two main characters are Lieutenant Torrens and his second-in-command, Adjutant Willsdorf. Torrens is young and barely experienced, but the film avoids the obvious trap of making him callow, hysterical, arrogant, or foolish, the usual way newbie officers are presented in war films. Torrens is competent, firmly in command, and usually listens to the advice of his adjutant. Willsdorf is the grizzled veteran of both the Second World War and the war in Indochina. When he disagrees with one of Torrens decisions he explains why, but then shrugs and carries on with his job. Neither of them indulge in histrionics.

Like the majority of films about colonial wars, the story is told entirely from the point of view of the colonialists. It's depressing but typical that a Western filmmaker has little or no interest in what the war in Indochina meant and did to the people who lived there. Hollywood's Vietnam films had the same flaw, as do recent films about the war in Iraq. The platoon's Khmer foot soldiers are ciphers, although in one brief scene it's made clear that the hold the French officers have over their men is, if not slipping, then certainly being looked at critically. And the ending, which is brutally swift, leaves no doubt that France is doomed to lose all her colonial wars.

Lastly, one of the most remarkable aspects of this film is that it was apparently filmed with a crew of six people. Six! There are Hollywood productions of the era that don't look half this good with a crew of hundreds. The black and white cinematography is excellent, as is the use of locations in Cambodia.