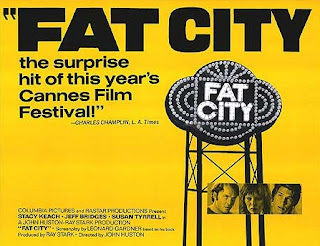 The poorest of the poor, the denizens of skid rows and flophouses, the frequenters of dive bars and bus station lunch counters, usually don't show up in films as anything but colourful background extras, briefly-glimpsed eccentrics/headcases, or as mildly threatening minor characters. Fat City directed by John Huston takes a non-judgemental, almost cinema verite look at three characters living in the ragged end of Stockton, California.

Billy (Stacy Keach) is an ex-boxer who's down on his luck, which, for him, is probably a chronic condition. He lives in a one-room apartment and makes ends meet as a day labourer picking crops. He meets Ernie (Jeff Bridges) at the YMCA and convinces him to take up boxing under the tutelage of Ruben, a local boxing coach and promoter. Billy takes up with Oma, a local barfly who's unattached after her boyfriend is sent to jail for a few months. Oma is in love with sherry, and the sound of her own voice in an empty bar. Ernie loses his first two "pro" fights and marries his pregnant girlfriend. Billy tries to make a comeback, wins his fight against an ailing, veteran Mexican boxer, but then loses Oma to her newly-released boyfriend. Billy hits the bottle and the film ends with him bumping into Ernie. The two go have coffee and share a long, uncomfortable silence.

European filmmakers have a long tradition of viewing the downtrodden through a sympathetic or dispassionate lens, but in Hollywood they've most often been viewed as comical, pathetic, or dangerous; abject failures, above all else. Given America's binary moral view of capitalism (poor=bad, successful=good), this is hardly surprising. Fat City doesn't try to place its characters in a socio-political context, or explain why they've ended up on skid row. Neither does it demonize them or go for cheap laughs or maudlin sentiments. The tone is observational, and the cool, unobtrusive cinematography makes the viewer feel at home in the rooms, gyms and bars the characters float between. Essentially, Huston steps aside to let the Billy, Ernie and Oma tell their stories without any directorial signposting or underlining. The films wants us to watch these people and not judge them; just watch and listen and experience their fragmented, messy lives as they do.

Boxing provides a loose framework for the film, with a drunk, destitute Billy meeting Ernie at the end and telling him that he's thinking of getting back in shape for what is probably the umpteenth time. Ernie has found some success boxing, but their final, silent scene together is a foreshadowing that Billy's fate will also be shared by Ernie. Although this isn't really a boxing film a la Rocky, the sport has always been the grand metaphor for American life, with its idea that achievement comes through bold, violent, individual acts in which there are winner and losers, and nothing in-between. Fat City dispenses with this myth by showing that boxing is simply another stop on Billy's stumbling journey through life, not terribly different from his time spent in bars or picking onions for $20 a day.

The performances are uniformly excellent, but the shining star of the cast is Susan Tyrrell as Oma. This is a role that could have led to severe scenery chewing, but Tyrrell keeps things very real. If you've spent any time in the kind of bars that have a coin-operated billiard table as their sole and only attraction, then you've probably seen, and certainly heard, an Oma. Tyrrell nails this character perfectly. Huston's direction is subtle but effective, and this could be considered a companion piece to Wise Blood (1979), a study of people on the edges in the Deep South.