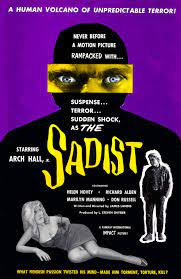 The history of B-movies should really be divided in two: those done before the total relaxation of censorship at the end of the 1960s and those before. For argument's sake I'll say 1970 is the dividing line. From that point onwards, the B-movie, more often called an exploitation picture, was all about graphic violence, nudity (female), and sex (hetero, unless set in a convent or women's prison). It would be more accurate to call exploitation pictures men's films, or perhaps testosterone cinema says it better. There's a world of difference between a 50s B-movie creature feature like, say, The Blob, and the sex and sadism of Ilsa, She Wolf of the SS (1975). Both successful B-movies, but the former welcomed, rather than enthusiastically scared off, a female audience.

The Sadist is interesting, and shockingly good, because it straddles the B-movie fault line between the tame 50s and the raw 70s. The simple plot has three teachers, Ed, Carl and Doris, driving through the desert on their way to see a Dodgers game in Los Angeles. Their car breaks down and they pull into a salvage yard to see if they can find a mechanic. The place is apparently deserted, although there's an ominously unfinished meal in the kitchen of the house attached to the yard. Ed begins repairing the car and that's when Charlie and Judy emerge from hiding. They're a pair of  young, giggling, psycho killers clearly based on real-life murderers Charles Starkweather and Caril Ann Fugate, who were more famously portrayed in Badlands by Terence Malick. Charlie, armed with a .45, forces Ed to finish repairing the car so he and Judy can continue their cross-country murder spree. The rest of the film is a pure exercise in tension as Ed works on the car knowing that he and Doris will be killed as soon as he's finished.

One of the things that sets The Sadist apart from its contemporary brethren is the absolute ferocity of its nihilistic tone. There's no escaping from Charlie's sadistic bloodlust, as Carl finds out early in the film when he's beaten and executed, joined afterwards by a pair of motorcycle cops who show up unexpectedly. The usual trope of the male hero saving the day through a clever trick or act of derring-do is completely upended by having Ed's stratagems all come to nothing, and he finishes by running for his life through the junkyard only to be shot down like a cornered animal. Only Doris lives to the end, which is due to sheer luck as Charlie falls into an old well and meets up with some pissed off rattlesnakes. The film ends with Doris stumbling through the desert as a baseball game, that all-American symbol of innocent good times, plays on a car radio.

Credit goes to writer-director James Landis (not related to John Landis, apparently) for crafting a tight script that continually defies the audience's expectations. His short-ish CV is filled with credits for run-of-the-mill TV westerns and cop shows, and it's easy to imagine that The Sadist is his reaction to the anodyne product that he had to produce to pay the bills. Of course, Landis probably doesn't make his film so nasty if Hitchcock hadn't kicked down the censorship doors with Psycho two years previously and shown that audiences have a taste for bleak horror.

Even more praise might be due to legendary cinematographer Vilmos Zsigmond (credited as William Zsigmond). This was his first feature and it's shot more creatively than many A-list movies of the time, and one brief scene in the house is done exactly as Hitchcock might have storyboarded it. I also think he shot it so that it was editor-proof. The scenes and shots flow beautifully without any of the continuity errors common to B-movies.

But like all B-movies, this one has its faults. The actors aspire to mediocre. Arch Hall Jr. as Charlie is menacing, but often to a cartoonish level, although I did like his hunched-over walk and monobrow, which I think is meant to suggest a hint of the Neanderthal. Helen Hovey plays Doris and seems to have a wisp of talent, but her job is strictly to be terrified. Acting aside, The Sadist is an exceptional B-movie that shows what can be done on a micro budget and a lot of creativity. Supposedly director Joe Dante has the only 35mm print of the film, so perhaps one day it'll show up in a pristine Blu-ray, rather than the dodgy version I watched on YouTube.