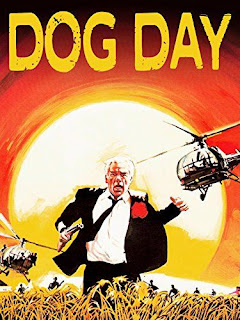 Until Covid came along and forced us all indoors to begin mainlining streaming services to while away the tedious days and weeks, I hadn't heard of this Lee Marvin film, and I consider myself a hardcore Marvin fan. This was his third-last film, it was never released in North America, and the scanty number of reviews I found online are mostly scathing. Time for a reappraisal.

Marvin plays Jimmy Cobb, a notoriously violent American bank robber who, for reasons that are never explained, is in France to pull off an armoured car heist. The police are tipped off about the robbery which results in a bloody shootout and leaves Cobb on the run across the flat wheat fields of the Beauce region. He stumbles across an isolated farmhouse one step ahead of an army of cops and hides in a barn. From his hiding place he observes the extended family that runs the farm, and quickly realizes that as bad as he is, he isn't a patch on these people. Yes, poor Jimmy has run into one of the traditional boogeymen of French culture: peasants. This crew run the gamut from insane to half-witted to full-on evil; even the young boy is completely around the bend. Over the next 24 hours Cobb will have to evade the police and family. He isn't successful at either task and the bodies begin to pile up.


The reason this relentlessly OTT and WTF? film is so forgotten and/or scorned is probably due to its essential character being so relentlessly French. If you're familiar with French thriller writers like Jean-Patrick Manchette, Pascal Garnier, Sebastian Japrisot, Frederic Dard, and even Georges Simenon, you'll be aware that les Francais have a taste for crime novels that are dark, perverse, twisty, and often enthusiastically nihilistic. Dog Day has all this in spades. As well, it features a horror of peasants that goes all the way back to Balzac and Zola. In fact, Zola's La Terre, is almost a template for much of the script.

Is Dog Day good? The cinematography is excellent, the constantly unfolding horrors ensure that the your interest won't flag, and the French actors give it their all, with special mention going to David Bennent, who played a strange little boy in The Tin Drum, and here plays an even stranger small boy with a taste for whiskey and prostitutes. And there's a deeply-buried vein of black humour running through the film that bursts out in a demented coda that announces that what's proceeded was half-dark joke and partly a surreal take on the place of American gangster films in popular culture. So, yes, Dog Day is very good, but it's definitely a case of love it or hate it.
Posted by Cary Watson at 20:19