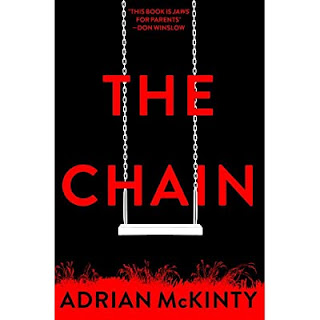 The best thrillers are exercises in diamond cutting. The artistry is in calculating and removing the excess, the superfluous and the extraneous to create something multi-faceted and flawless. The digressions, circumlocutions, and flourishes of the literary novel are chiseled away to create a story that's built to move forward relentlessly, one exactingly calculated, and unexpected, plot point at a time. It's perhaps the oldest, purest form of storytelling; our hero(ine) is suddenly faced with a perilous threat or task and must put everything aside, all their worldly concerns, in order to set the world (personal or otherwise) to rights. By these standards, The Chain is a diamond of the first water.

The "chain" of the title refers to a seriously evil, but clever, kidnapping scheme. It works like this: a child is kidnapped and held for ransom. The twist is that the child's parents must then kidnap another child before their own child is released. Once the next child's parents have paid up and grabbed another kid, the previous victim is released. The masterminds of this scheme don't involve themselves in the kidnappings in any physical way. They started the chain going years previously and now collect the ransoms (untraceable Bitcoin payments) and supervise, as it were, the kidnappings via cyber-snooping. The Chain has worked flawlessly until it catches up Rachel Klein's daughter, Kylie.

Rachel is divorced and a recent cancer survivor. She enlists the help of Pete, her ex-brother-in-law and a former marine, and the two do as they're told and kidnap another child. Kylie is eventually released, but the anonymous operators of the Chain haven't finished with Rachel. And Rachel hasn't finished with them. She and Pete begin investigating the Chain, but to say more would be to venture into spoiler country. Suffice to say that the bad guys are closer to her than she could have imagined.

The Chain succeeds marvelously in its thriller mandate; it makes the reader stay up too late, mutter "Oh, fuck!" at various points, skip important household chores, and even forget to brood angrily over whatever Trump's said that day. Quite an accomplishment. All thrillers are supposed to do this, but McKinty has added a couple of elements that take his novel up a notch. The first is forcing us to root for Rachel as she commits a completely awful crime. Yes, we know that she has to do it, but it adds a level of moral horror to the story that's not often found in stories such as this.Thrillers like The Day of the Jackal sometimes ask us to root for bad guys, but do so more in the spirit of an intellectual exercise: are they clever enough to get away with this? Rachel''s "crime" is simply brutal, because there's no getting around the savagery of terrorizing a young child and her parents.

The other intriguing element in The Chain is a motif that's appeared before in McKinty novels. Rachel has had more than a brush with cancer, and as the novel opens she is barely recovered from her latest round of treatments. And there's no guarantee her disease won't come back. This makes Rachel a wounded heroine, one marked by a near-death experience. McKinty's Michael Forsythe trilogy featured a hero who had lost a foot, and almost his life, in a brutal Mexican prison camp. In The Lighthouse trilogy (YA novels) the young hero has lost an arm, and nearly his life, to cancer. In religion and mythology wounds mark out beings with extra or special powers. The Fisher King from Arthurian legend carries a wound in his leg, as does Bran from Celtic mythology, and Christ is sometimes referred to as the "wounded healer.". Wounds mark out great warriors, those who are fearless when faced with Death and thus able to undertake dangerous tasks. On the pop culture side, films are full of wounded protagonists, from kung fu films with blind or one-armed swordsmen, to westerns in which the heroes are beaten or disgraced before redeeming themselves. And what would crime fiction do without its legion of detectives who bear the psychic scars of losing a spouse/child/partner in some terrible way? Rachel's illness has taken her close enough to the darkness that its terror is diminished, which gives her the bravery and determination to fight back against the Chain.

So, if you feel Covid and Trump aren't providing enough tension in your life, pick up the The Chain. Unlike the former it has a satisfying conclusion, and unlike the latter it does its job efficiently, smartly and with flair.

Email ThisBlogThis!Share to TwitterShare to FacebookShare to Pinterest
Labels: Adrian McKinty, The Chain