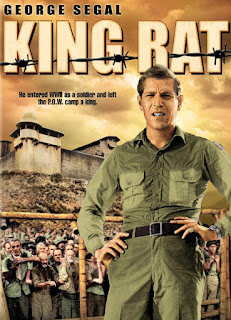 The recent death of George Segal led me to this fim, and it's remarkable for a few reasons. The first is that it's one of the rare Second World War films from that era that isn't triumphalist in tone. The story is set in Changi POW camp near Singapore in 1945, which is where James Clavell, the author of the novel the film's based on, was held captive during the war. The POWs are mostly British and Australian, with a few Americans. Segal is Cpl. King, the camp's fixer, wheeler-dealer and chief predatory capitalist. While the other prisoners stagger around the camp in rags that show their skinny bodies, King always wears an immaculate, if sweaty, uniform and is the picture of rude good health. Being a hustler and middleman has been good for King, and he rules his prison hut like, well, a king. If you need something essential, you have to go through King.
King Rat isn't about escape or the triumph of the human spirit, the usual tropes of POW films, it's purely about survival, and the film works hard to show how wretched the conditions were. The easiest comparison point for King Rat is The Bridge on the River Kwai, which almost glosses over the brutality of life in Japanese POW camps in favour of action/adventure. By the standards of early 60s filmmaking, King Rat pushes the envelope in showing the dirt, desperation and starvation afflicting the POWs. The prisoners eat bugs and rats, cheat each other out of rations, and murder those they catch stealing food. A few have been driven mad by captivity, and, in a bold move for a film from that era, there's a clear suggestion of gay relationships. The severity of their suffering is captured in the finale when the camp is finally liberated and the POWs greet the first British soldier as though he's an alien dropped amongst them; they recoil in shock and run away.
The film is also notable for its gleaming, beautifully composed cinematography by Burnett Guffey, who also shot Bonnie and Clyde, but doesn't have as many major film credits as one would imagine. It was filmed just outside Los Angeles, but it never looks or feels like something made on a Hollywood backlot. Segal, the fit, good-looking version of Walter Matthau through much of his career, gives a strong performance that's matched by James Fox as Marlowe, a British officer who falls under King's spell.
If there's a flaw here it's that the film can't settle on its view of King. He's cold, calculating, cruel at times, but then he risks everything to save Marlowe's life when he contracts gangrene. And then at the end he cold shoulders Marlowe as the prisoners are being repatriated. Evidently in the novel King was shown as a more heroic anti-hero who realizes that skill at survival counts for more than honour or duty. And the placement of an anti-hero at the centre of the story is probably why this film isn't as honoured or as well known as Kwai and others of that ilk.
Posted by Cary Watson at 13:51