Book Review: Soldiers of Barbarossa by Craig W.H. Luther and David Stahel (2020) and An Englishman at War by Stanley Christopherson (2014) 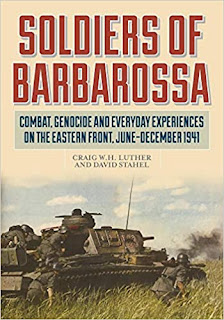 Histories of the Second World War gives us at least a glimpse of its horrors; Soldiers of Barbarossa tells an even crueler story through the words of German soldiers. Soldiers is a collection of letters sent by frontline members of the Wehrmacht and Luftwaffe to their friends and relations detailing their experiences fighting their way across the Soviet Union from June to December of 1941. What's significant about this book is the glimpse it gives us into the mind of the average soldier.

Letters sent by about 200 different soldiers are used in the book, and perhaps only a handful of individuals could be described as anti-Nazi or neutral. The vast majority are enthusiastic in their loathing of Jews and Russians, approving of executions of the same, and almost uniformly in thrall to Hitler and Nazism. Although the editors of the book point out that only a minority of German soldiers, usually belonging to specialized units, took part in mass, organized killings of Jews and Russian, these letters make clear that most would have been fine with lending a hand. The myth of the "good" German soldier takes a battering here. 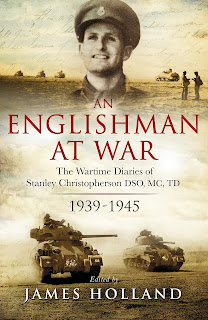 What's almost as disturbing as the vicious descriptions of Jews and Russians is that the rhetoric and logic used to describe these hatreds is astonishingly similar to what Trump, Fox News and the GOP have been spouting for years: opponents are bestial, treacherous, criminal, and irredeemable, and their political views are deranged. The Leader is brilliant, infallible, our last and greatest hope, and knows exactly what he's doing. The letters sent home in late December 1941, as the winter bites and Soviet resistance stiffens, show a slight decline in enthusiasm for the leader and the war effort, but not that much.

An Englishman at War is the memoir of a British tank officer who fought in North Africa and Europe. Over the years I've read a lot of memoirs of this type, and while it doesn't offer anything unique, it's a fascinating counterpoint to the letters found in Soldiers. Politics and ideology are almost entirely absent from Christopherson's book, and that's true of the vast majority of British and American war memoirs I've read. There's lots of talk about the creature discomforts of war, the terror and confusion of battle, and the cruelty of what war does to men's minds and bodies, but  the visceral hatred of the Other and the mindless, true believer worship of a political/racial ideology as shown in Soldiers, is absent from Allied memoirs.

The term "radicalization" is used to describe the process that's created today's white supremacists and far-right groups, and that term fits perfectly for what's revealed in Soldiers.  By 1941 Germans had been subject to eight years of Nazi indoctrination and propaganda, and the words of the fighting men show how successful that effort was, and all without the help of Facebook, Twitter, YouTube or Tucker Carlson.