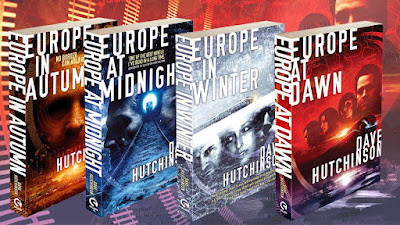 Dave Hutchinson's Fractured Europe series of novels, comprising Europe in Autumn, Europe at Midnight, Europe in Winter and Europe at Dawn, have jumped back into the news because they're set in a post-pandemic world that's been ravaged by a flu originating in China. Their sudden topicality isn't what makes them unique and excellent, but if you're hellbent on reading pandemic-themed literature, grab these rather than that thing Boris Johnson's dad is peddling.

The setting for the novels is Europe in the near-ish future after it's been split into its linguistically and/or culturally constituent parts. Nationalists have created dozens of new, smaller countries, and there are even city-states (founded by municipalists?). The EU and the idea of free movement are long gone, and there are new borders everywhere. Each border has its own special restrictions, which has led to the creation of a shadowy organization called the Coureurs des Bois. They sneak people and packages across borders for a hefty fee, and the main character in the Europe series, Rudi, is one of their top operators.

This not-so-basic premise would be enough for most novel sequences, but Hutchinson adds a gobsmacking SF element that brings in the idea of pocket universes to go alongside pocket countries. And I forgot to mention a continent-spanning train track that functions as a separate country. There's a lot to to digest here, some of it very high-concept,  and in less capable hands these ideas could have come across as ludicrous or cartoonish, but Hutchinson manages it deftly thanks to his skill at world building. His fractured Europe is built from the bureaucratic floor up. This novel sequence is largely told through the eyes and actions of functionaries, civil servants, ordinary workers, and small-time crooks. This collective prole's-eye view allows us to see this strange world as a new normal for people much like ourselves. For them, the peculiar realities of their world(s) are just so many day-to-day challenges that have to be endured or overcome with a bit of determination and energy. Most high-concept SF takes the god's-eye view of people at the heart of managing or defeating a crisis, which can turn these characters into quasi superheroes and thereby less relatable. When a fictional world is filled with people we easily recognize--confused, ordinary, humane, struggling to cope--that world becomes believable no matter how unlikely its features.

The novels capably blend intrigue, mystery, suspense, and, in an overall sense, they have the flavour of the best spy fiction (think Deighton and Ambler) audaciously combined with SF elements. In theory, this mixture shouldn't work, but it's all deftly handled, and, unfortunately, it's all seeming less unlikely by the day.