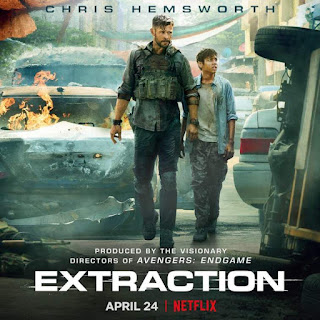 If only Extraction, starring Chris Hemsworth, had been about a super-buff Australian dentist who removes teeth with his bare hands. Yes, that would have been a horrible idea, but no worse ( and possibly better) than what Netflix have dropped on us this week to further blight 2020. I'm highly tolerant of loud, bloody, action movies (more John Wick, please), but this is wholly unlovable.

To begin with, instead of Goofy Chris we're given Serious Chris. Bad idea.  When Serious Chris screws up his face to indicate sadness, it looks like he's grieving over that time he ruined a high-intensity workout by eating a whole sleeve of Tim Tams. Chris plays Tyler Rake, a mercenary, and a man cursed with a name stolen from a Regency romance. That's not what makes him sad. Tyler is a broken man. We know this because he drinks and pops pills, and has flashbacks that are out-of-focus, poorly framed, and overexposed, much like a YouTube video in which something goes hilariously awry at a wedding reception. The flashbacks tell us that Tyler has lost his wife and young son, but not, unfortunately, in the, they're-probably-somewhere-in-the-food-court way.

On with the plot! A Mumbai crime lord's young son is kidnapped for ransom by the crime lord of Dhaka, Bangladesh. Tyler, who works for a company that pops up when you google "Shadowy", is tasked with retrieving the boy. Will Tyler gain some kind of redemption by rescuing the lad? Can Chris Hemsworth dead lift 200kg? A solid yes to both, although in order to recover one boy, Tyler will create approximately 435 orphans. A poor ROI, morally-speaking, but more on that later.

Tyler shoots, stabs and punches his way across Dhaka with the kidnapee in tow, leading to a climax in which he must cross a bridge crowded with cops who couldn't shoot a fish in a barrel even if they were inside the barrel and armed with a special fish blunderbuss. The action sequences are a repetitive cycle of Tyler slaughtering crowds of balaclava-clad cops while shrugging off physical punishment (hit by a car!) that would cripple a rhino. And why balaclavas? So the same seven or eight stuntmen can be used over and over again. And here's where things get sticky; Tyler is, for the most part, killing cops. Not criminals, just ordinary cops who are under orders from Dhaka's corrupt chief of police. Imagine a film in which the hero kills dozens and dozens of NYC cops en route to saving one child. You can't, can you? The difference is that these are brown cops in one of Trump's "shithole" countries, so in the imagination of the Russo brothers (the producers and writers), they're just Third World collateral damage in Rake's journey to emotional recovery.

So what starts as just another paint-by-testosterone action movie ends up carrying a whiff of racism. On the whole, I prefer my dentist concept. And if you want a bloodthirsty Netflix product that isn't morally questionable, check out Night Comes for Us, an Indonesian martial arts film that's brilliantly violent and OTT.
Posted by Cary Watson at 17:36