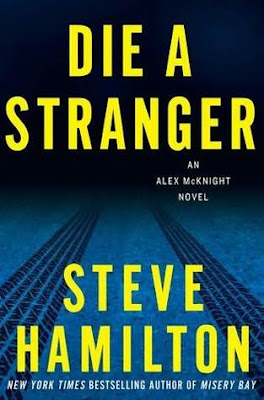 One of the things that distinguishes crime fiction from other genres is its frequent focus on creating a strong sense of place; in fact, this could almost be said to be the defining quality of the genre. From Raymond Chandler's L.A. to Val McDermid's Fife, Scotland, there are few crime writers who haven't tried, as William Faulkner said, to bring to life "their own little postage stamp of soil." Of course, this emphasis on a specific region or city is partly a natural byproduct of authors using the same detective/investigator who, in book after book, patrols the same turf. But it's not always the case that writers make the effort to drill down into their "postage stamp." Simenon's Maigret novels, for example, are often set in Paris, but they're not about Paris in the same way that Tony Hillerman's Leaphorn and Chee mysteries are about the vast Navajo reservation in New Mexico. With Simenon Paris is only a setting, while Hillerman makes his setting a character, one that has a significant influence over events and personalities. Some other notable writers who turn environments into characters include K.C. Constantine, Adrian McKinty, Giles Blunt, and Christopher Fowler. Add Steve Hamilton to the list.

Hamilton's investigator, Alex McKnight (featured in eleven books), lives in Michigan's Upper Peninsula, a region defined by the bush, the Great Lakes, and Native American reservations. I've lived and worked in northern Canada, and Hamilton gets the atmosphere of this environment perfectly; in particular, he gives the reader a feel for the divide, and occasional tension, between Natives and the white community. As well, he captures the necessary interconnectedness of the people who live in these isolated, underpopulated areas, bound together by blood ties, friendship, and sometimes long-held grudges. It's a peculiar world that's largely the same on both sides of the border, and Hamilton clearly knows it well.

In Die a Stranger McKnight becomes caught up in a cross-border drug smuggling operation that goes wrong and which also drags in one of his close friends. The plot mixes mystery and thriller elements, but it also takes time to build up a picture of life in the Upper Peninsula. I'd read several thrillers in a row prior to Stranger, so there was something pleasing about a story that wasn't trying to slap me across the face every second. I've no objection to pure thrillers, but they can become formulaic and predictable when you know that every chapter is going to end with some kind of twist or shock reveal. A crime novel such as this can actually be more surprising because it digresses, taking quick side trips to places that are new or foreign to us, e.g. a look at the impact of  Native-owned casinos on reservation life. And Hamilton puts equal emphasis on the personal relationships that bind his characters and often direct their actions. The finale, in fact, avoids the usual violent, climactic encounter or arrest, and instead has a father telling McKnight about a sacrifice he's going to make to save his son. It's an unexpected way to end a crime novel, and it's all the stronger for it.