The Republic of False Truths (2020) by Alaa Al Aswany 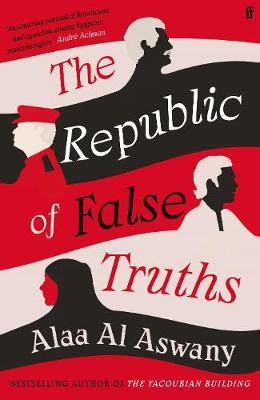 One of the surest indications of the quality of this novel about the popular revolt in Egypt in 2011, is that the author is no longer welcome in his native Egypt and the book is banned there. The Republic of False Truths is turbocharged with anger and outrage at how the Egyptian state and its ruling classes reacted to the mass protests in Tahrir Square with violence and a vicious, hysterical propaganda campaign.

Al Aswany tells his story through the eyes and voices of the protestors and their oppressors. On one side are the poor and educated twentysomethings who have finally had enough of the corruption, brutality and spectacular hypocrisy of the state and Egyptian society. On the other side are those who benefit from the status quo: businessmen, high officials in politics and state institutions, and careerists in religion and the media who seek to further their ambitions by siding with whomever is in power. When the state cracks down they do so with massacres, torture, sexual violence against female protestors, and an egregious media campaign that tries to paint the protestors as paid accomplices of the CIA and Israel.

The novel's dozen or so characters range from the head of Egypt's security service to a maid. In general, Al Aswany isn't subtle with his characters; the good ones (protestors) are pure in their intentions, while the bad ones are implacable in their desire to bring harm to the other side. I'm not qualified to say whether the situation was that black and white in Egypt (I suspect it was), but the stark divide between the two groups of characters occasionally gives the novel a melodramatic flavour.

Two characters, Nourhan and Ashraf, stand out because they're given more interesting shadings. Ashraf is a middle-aged, well-off, barely employed actor, who spends his days smoking hash and conducting an affair with his maid. He and his wife are barely on speaking terms. He witnesses the first massacre in Tahrir Square in which hundreds of protestors were shot by the police and instantly becomes radicalized, throwing in his lot wholeheartedly with the student protestors. Ashraf's Damascene conversion is, perhaps, too abrupt and complete, but he's at least a character who's given a chance to change. Nourhan is the star of the novel, and Al Aswany uses her to paint a picture of Egypt's toxic levels of hypocrisy. She's a popular and beautiful talking head on one of the country's official TV channels, as well as exceedingly and loudly pious. That doesn't prevent her from using Islamic divorce laws to essentially sleep her way to the top, and, once there, as the face of a private TV channel, become the Tucker Carlson/Sean Hannity of Egypt as she spouts officially written and approved propaganda. She's a monster who thinks she's a saint.

If there's an overriding theme to the novel it's the pernicious role of religion in Egyptian society. The ruling classes use it as a goad, a weapon, and a one-size-fits-all excuse for their worst crimes. And as shown through Nourhan and a religious leader named Sheik Shamel, piety can also be monetized. Although there's nothing subtle about Al Aswany's approach to his subject (not surprisingly, he took part in the Tahrir Square protests), his anger and his clinical descriptions of state-sponsored violence give the novel tremendous energy. And this isn't just a novel for people interested in the Middle East. A lot of what takes place in the novel has an eerie similarity to the recent BLM protests, the fall of Trump, and the Fox News-led backlash against both events. After all, when it comes minting money from religion and manufactured outrage, America leads the world.