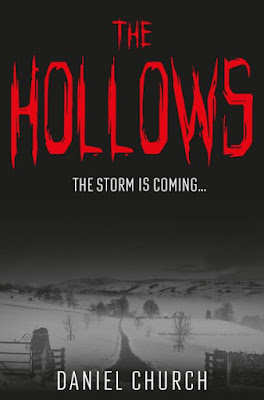 Folk horror, which is the category The Hollows mostly falls into, is very much a UK-based genre. From M.R. James to Algernon Blackwood to Andrew Michael Hurley, British writers (and filmmakers) have shown a real eagerness for presenting their docile, bucolic countryside as a mosh pit of malevolent ghosts, devil worshippers, green men, fairies, hobgoblins, spectral black dogs, ghouls, and any number of creeping terrors. It's as though they're embarrassed to be living in such a groomed, unthreatening environment and need to populate it with imaginary horrors. Folk horror doesn't seem to register on continental Europe, with the exception of the vampire, a creature from eastern European folklore that needed an Irish writer to really gain traction in the marketplace and move uptown to the intersection of Hollywood and Hammer. European writers have long recognized that the scariest entities are other people. The French, in particular, realize that there's nothing more terrifying in the paysage than a scheming, avaricious peasant. Why worry about church grims when you've got Cesar and Ugolin for neighbours? Or, even worse, the murderous and incestuous peasants on display in Zola's La Terre and the film Canicule.

The Hollows has many virtues, one of the more noteworthy being that it starts with a bang and doesn't let up. I've started and not finished so many high-concept supernatural and SF novels that tease and slow burn their way into my reject pile because the writers get obsessed with world-building rather than fully engaging with their subject. Not an issue here.

The small village of Barsall in England's Peak District is snowed-in a few days before Christmas, and before you can sing "God rest in peace ye merry gentlemen," isolated houses are being attacked by...things. Things that like to peel the skin off their victims in the name of haberdashery. They are Tatterskins, long-forgotten creatures of local legend that have suddenly come back into the world. Almost as frightening are the Harpers, a mostly loathsome farming family who sit on the nastiness spectrum somewhere between the Starkadders of Cold Comfort Farm and Leatherface's tribe. The Harpers, led by matriarch Liz, have a somewhat administrative relationship with the Tatterskins, and hope to survive the local harrowing of souls and bodies by offering sacrifices, animal and human. Opposing them is Ellie, the local constable who has to organize a terrified citizenry to battle both the Harpers and the Tatterskins.

Like I said, the action is relentless and brings with it a very high body count. Although its genre is folk horror, other elements creep into the story. At times it feels like a supernatural version of Zulu ("Tatterskins, thousands of them!") as Barsall comes under siege, domestic horror raises its head as we enter the world of the Harpers, and there's even a quasi-Wild West shootout. Towards the end, the novel moves from folk to Lovecraftian cosmic horror. This shifting of genre gears is hugely effective in keeping the reader engaged and pleasantly off-kilter; we're never sure what's coming next, and that adds to the tension. The narrative is further aided by Church's clever use of micro-crises to build tension. No-one in this novel can do anything time-critical without first hesitating, tripping, fumbling or otherwise faffing about while something nasty closes in. Ellie is a strong, determined heroine, but never unbelievably skillful a la Jack Reacher. Liz Harper might be the star of the show as the kind of mother only a Balrog could love. The only thing that didn't work for me was the cosmic horror add-on. It was an element that felt a bit tacked-on and underdeveloped. It doesn't hurt the novel, but it certainly doesn't help it. That said, this is still one of the best horror novels I've read in years, and also one of the best action-thrillers.